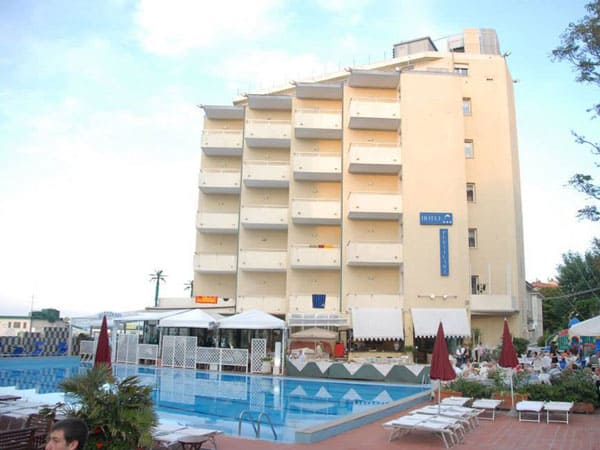 The patisserie of the Marches and Romagna, protected in the valley of the Foglia river of the slopes of the Colle Ardizio of the Natural Park of Monte San Bartolo, Pesaro is a town of 90,000 abrigato located on the northern coast of the Marche region, a trait also known come "Riviera delle Colline ", because the hilly landscape of the hinterland can be seen from the wide sandy beaches.
Pesaro has many nicknames: "city of bikes" on the great network of cycle paths; "city of music" in memory of the great composer Gioacchino Rossini whose conservatory and theater are involved.

Approximately one hundred tourist accommodation facilities, some of which are open all year, for a total of about 11,000 beds.
Therefore, we are not at the level of the Romagna industry, but Pesaro knows how to deal with equal arms, without inferiority complexes, and obtains each year, in spite of the crisis, increasingly encouraging results.

For several years the city has been awarded the Blue Flag, recognized for the virtuous environment, services and water quality.
Hoteliers know how to master themselves with hospitality, quality of services and initiatives, great attention to the gastronomic offer and to the needs of the guests.

Of course, most of their tourists, the Hotel di Pesaro owes them to the sea, but there are other aces up their sleeve, such as the historical-artistic attractions, the beautiful and ancient villages in the hinterland, the fairs, the congresses and the events that fill the calendar of greedy occasions in every season.

To help you in your choice you will find many sections aimed at every possible need, such as hotel with wellness center, for celiac, with swimming pool, for the disabled, annual, with air conditioning or wi-fi. You can choose between hotels, residences, bed & breackfast and apartments, and if your goal is to get the best quality / price ratio, then do not miss to visit the special offers, offers for children, last minute and promotion week.

Other Recommended Hotels of the Riviera Marchigiana

It is not only a moment in the happy position and in the 7 kilometers of beautiful terrace, but shines in the ancient history that precedes definitively the Roman foundation of Pisa (from the name of the river Foglia: Isaurus or Pisaurus), as the 300 Piceno tombs of the necropolis of Novilara or the noble and mysterious aura that emanates from the territories of Montefeltro, among the rolling hills that died in Italy to Raffaello Sanzio and to the proud Duke of Urbino.

In the city center there are splendid Renaissance testimonies such as the Palazzo Ducale in Piazza del Popolo commissioned by Alessandro Sforza or the fountain opposite with tritons and horses, built more than a century later by Francesco Maria II della Rovere.
Also in the center you can visit the home of Gioacchino Rossini, now used as a museum of the famous musician, author of Il barbiere di Siviglia.
Gioiello Rossini, housed in the neo-classical Palazzo Olivieri Machirelli, inside are the frescoes of the pesaro Giovanni Andrea Lazzarini; And of course, the Gioacchino Rossini Theater, built in 1637, today it is imposed in its eighteenth-century life and every year is the Rossini Opera Festival.

The central and seventeenth-century Palazzo Mosca is home to the Civic Museums, whose flagship is the altarpiece with the Coronation of the Virgin by Giovanni Bellini, the undisputed masterpiece of the Italian Renaissance. It is a series of ceramics and majolica, one of the most representative of those produced in the ancient Duchy of Urbino, where the art of majolica is protracted without interruption from the late Middle Ages to the contemporary era.

A separate mention deserves the city's cathedral dedicated to Santa Maria Assunta, built on what remains of two ancient paleochristian basilicas, one of which dates back to the century. IV ° -V ° and the other to the sec. VI °. How much was there for the restoration of a film iconographic apparatus. Today it is partly visible, it is one of the best places of interest in Ravenna and Otranto.

A street from the center, leaning against the city walls of the Malatesta era, stands the elegant and austere mole of Rocca Costanza, named in honor of the then lord of the city Costanzo Sforza, who had it built on a project by Giorgio Marchesi da Settignano. In the direction of the Marchesi's works, Luciano Laurana, considered one of the most important architects of the XV century, followed, following a death of these, Cherubino di Giovanni da Milano who completed the work.

SEAFRONT
But in more recent times the seafront is certainly the most sought-after area, ever since the pharmaceutical entrepreneur Oreste Ruggeri built the liberty villa on the threshold of the 20th century, which still bears his name.
The beauty of the seas and flowers on the beach and the mountains are the most beautiful and beautiful in the world of the garden city, ending up representing the most coveted and representative goal of an attained social ascent.

Today the dense fabric of shops, restaurants, ice cream parlors, sale of games and entertainment venues, along with markets, cultural events, shows and shows, crown and enhance a comfortable and relaxing beach life, in line with the standards of the nearby Riviera Romagnola, but at the same time less chaotic and stressful.
A large number of denominations, is an excellent quality / price ratio, appreciated by the lowest, gently sloping and safe, particularly suitable for families with children and for less experienced swimmers.

The beaches are mostly soft and sandy, narrower at the two promontories bordering the south and north. The entire province of Pesaro has both large sandy beaches, which treats less beaten dove the sandy mantle is replaced by pebbles and stones, sometimes you can reach small beaches hidden through small paths that from the scrubland of the Natural Park of San Bartolo or Colle Ardizio steep descend to the sea.
For the most mundane spirits there is no lack of sports, entertainment, small bars and restaurants where you can enjoy delicious specialties, aperitifs, breakfast, music and dancing. So many equipment and activities for the little ones and not just the pet friendly.
The many free beaches are useful and precious, not only because they make the game accessible to everyone, but also for those who love to live it in a more direct and less "tame" way.